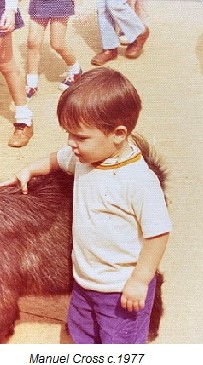 I was born in La Mirada, California. My mother worked and later managed at a credit union; my father was a dock worker who later learned computer programming; he’s an absolute computer wiz! I still remember the Commodore 64 computer he started out with in the early 80s. I spent a lot of time with my grandfather while they worked; he was a retired navy man. At his house I recall the permanent smell of tobacco in the air. From the kitchen was the perpetual pot of coffee and in his grooming kit a bottle of Old Spice. I’d pull that bottle out often and open the cap to smell the magical contents within. It was quite magical actually, the imagery that would soar through my head from that fragrance! Even now the fragrance of Old Spice evokes a collective stream of imagery of those childhood days. My grandfather had a lady friend who was the quintessential free spirit. She was an artist, she was travelled, and she had an impressive library of books. E.E. Cummings, Kurt Vonnegut, tons and tons of art books. One could imagine that she was quite the Auntie Mame to a young impressionable child like me. She taught me art –basic sketching, charcoal and acrylics. It seems from this point that when I think back to my childhood, I can almost see the memories as impressionist images. Blots of sunlight through dark clumps of leaves, simple strokes of pastel colors make out the details of my surroundings.

This email has been registered!

Back In Stock Notification